skip to main | skip to sidebar

On November 5, 2009, I was the Fox Sports Arizona/Sanderson Ford Lincoln Mercury KidKaster at the Phoenix Coyotes vs. Chicago Blackhawks game.

On October 17th, Fox Sports Arizona held auditions for the KidKaster program. I was the first person to audition that day. Some of the questions they asked were: Why should you be the Fox Sports Arizona/Sanderson Ford Lincoln Mercury KidKaster? How long have you been a Coyotes fan?

I received a call in late October saying I had been selected as the KidKaster for the November 5th game against the Blackhawks. I was so excited. KidKasters recieve a behind the scenes tour of the Fox Sports Arizona production truck, four tickets to the game, dinner, a tour of the broadcast booth, and five minutes in the broadcast booth with Dave Strader, the play by play announcer, and Tyson Nash, the color analyst.

I had a ton of fun. The production truck is so cool. At least twenty people work in the truck. Two people work on the graphics. They were searching the Internet for graphics and statistics during the game. The truck is like controlled chaos during the game. It is amazing what they do in there. One whole wall is covered in television moniters. The technical director had a sound/video board in front of him that was a least 4 feet wide and 2-3 feet deep.

Here are some of my favorite photos from that night. 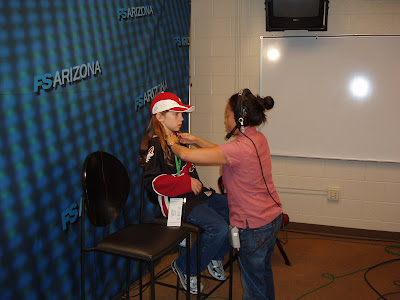 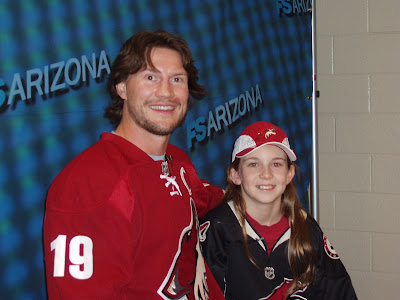 As soon as Doan came in, he immediately recognized me from previous times I had met him. He said, "Hey, buddy!!" I thought it was cool when he came in wearing his jersey, hockey tights and was barefoot. 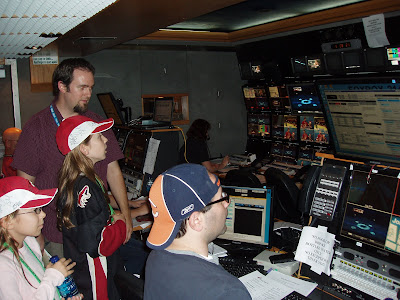 In the FSArizona production truck with my sister, Siobhan 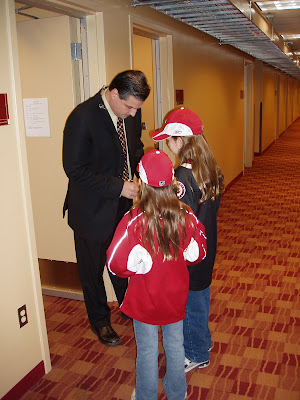 Before the game, Eddie Olczyk was in the Yotes broadcast booth chatting with Dave Strader. As he came out, I met him, and he autographed my press pass.

Several of the Blackhawk's dads were at the game. I saw Patrick Kane's dad, Jonathan Toews's dad, and Patrick Sharp's dad on the media level. Todd Walsh was great! He gave me lots of tips and pointers before the pre-game show, and was really nice. Even though he is a Yankees fan, and I love the Red Sox, we both love hockey! 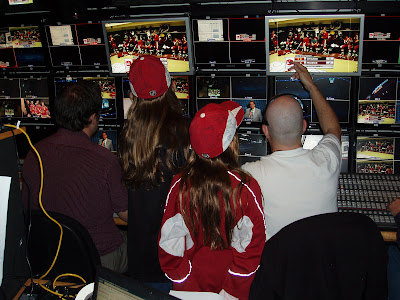 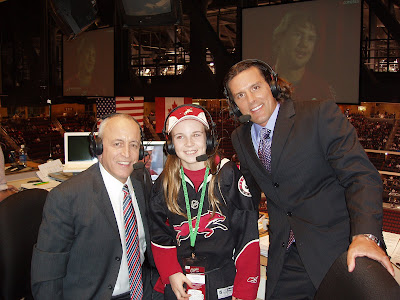 In the broadcast booth with Dave Strader and Tyson Nash

It was awesome that we finally beat the Blackhawks.

Hockey Freak
I am a huge hockey fan. I have been crazy about hockey since I was six. My favorite teams are the Phoenix Coyotes, Boston Bruins, and University of Maine Black Bears.